Today the Star Tribune has three different op-eds lamenting the influence of teachers' unions and advocating for more Charter Schools. Of the three, the worst, and longest, is one by Minneapolis Councilman Don Samuels, along with Chanda Baker and Sondra Samuels. 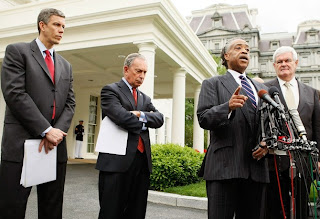 failure to attract federal money from President Obama and his Education Secretary's "Race to the top" program. Samuels, et.al. shockingly compare modern-day school teachers to the racist George Wallace, who personally stood in a doorway of a school that was ordered desegregated in Alabama:

[the teachers' union] stands defiantly in the school entrance, horn in hand, blocking any innovation that would lift black children from north Minneapolis out of the endless cycle of poverty and failure...

Ignoring the obvious comparison of school teachers to a southern bigot, what is the evidence that the teachers' union is responsible for the "cycle of poverty and failure" in north Minneapolis? According to the authors, the great crime of the union is that it doesn't want to acquiesce to so-called "performance pay" or "alternative teacher certification." An honest discourse would admit that these arguments are ludicrous, for any number of reasons. How does putting less qualified teachers in the classroom help achievement?

Oddly, the national discussion over why students are testing poorly has been ridiculously crude, if not outright dumb. Both politicians and the media have focused the blame exclusively on teachers. No attention is given to the fact that so-called failing schools have been bled dry of funding. It is impossible for a teacher to succeed when there is not enough money to buy books for all the students or when classes are overcrowded, especially in schools that have students with special needs.

Poverty, and the countless social ills born from it, are the obvious reasons why students perform poorly (high income schools are never labeled as “failures”). By ignoring this glaring fact, politicians reveal themselves to have ulterior motives...

On this issue President Obama is sadistically and shamefully wrong - punishing poorly performing schools, while rewarding those that are doing well. What is the point of such a policy except to further exacerbate the problems of people who are "mired in poverty and failure" ?? The goal of Obama's policy is to create more Charter schools, which is really insane if increases in academic achievement are desired.

“Rather than being a solution to the educational problems faced by low-income students and students of color, charter schools are deepening these problems.”

So what Samuels, et. al. are saying is really garbage. If we were to take their advice we would essentially be making their schools worse.

Of course, the union bashers don't lack for their own "facts" to countermand the real evidence delivered by peer-reviewed social science research. One need only look at the Neocon funded National Bureau for Economic Research to find "evidence" that somehow teachers who are poorly trained outperform those who have studied and practiced for years. Like just about any issue the Neocons push, the truth doesn't really matter. If the facts don't match their positions then they make up their own, then emit them through what David Brock calls "The Republican Noise Machine," of which the Star Tribune is apparently now a member.

Probably the worst part of Samuels' commentary is his degenerate personal attack on the teachers' union head and its members, calling them "cynical, morally bankrupt" focusing "more on protecting the adult members of teacher unions than protecting the interests of the state's most vulnerable children." Samuels libels the union by claiming it has a commitment "to thwarting real reform [blocking] every bridge that spans the racial and socioeconomic performance gap." That's the kind of emotional garbage you get in an argument when the person making claims does not have the facts on his side. And it's what you find more and more on the Star Trib commentary pages.
_____

BTW - I submitted this as a letter about Charters last week, but of course it wasn't published.
Posted by Rob Levine at 9:21 AM