The Charter school chart no one will see

Last year Stanford University did a comprehensive study of Charter school performance in 16 states. The chart below shows that many more students perform academically worse in Charter schools than perform better. Bob Peterson, from Rethinking Schools, told Democracy Now! that

I can pretty much guarantee that you'll never see this chart on the TV news shows, nor in any traditional media. Yet Arne Duncan and Don Samuels will continue to insist that we inflict more failing schools on our students. 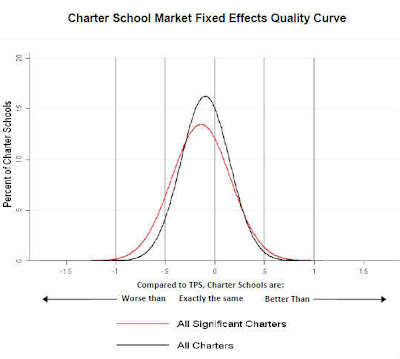 The study showed that for every student who did better (in math, at least) at a Charter school, two did worse. What more proof is needed to show the Charter movement is a failed experiment?

UPDATE: In the wake of the Stanford study, even the right wing Diane Ravitch, a longtime supporter of so-called "school choice" has turned on the movement, writing that:

What we need is not a marketplace, but a coherent curriculum that prepares all students. And our government should commit to providing a good school in every neighborhood in the nation, just as we strive to provide a good fire company in every community.

On our present course, we are disrupting communities, dumbing down our schools, giving students false reports of their progress, and creating a private sector that will undermine public education without improving it. Most significantly, we are not producing a generation of students who are more knowledgable, and better prepared for the responsibilities of citizenship. That is why I changed my mind about the current direction of school reform.

What's next, Mitch Pearlstein admitting that school choice is a failed experiment? Don't hold your breath.
Posted by Rob Levine at 2:52 PM