Kudos to Star Tribune reporters Paul McEnroe and Tony Kennedy and their editors for a continuing series titled MnDOT money vs. safety, on the Minnesota Department of Transportation's (MnDOT) self-destruction under governor Pepsodent's (Pawlenty) administration. Additional kudos for the name of the series, and the headlining on the stories themselves, which unlike many recent Strib heds actually characterize the report.

A Dart to Nancy Barnes, the paper's editor, for saying in a column published the day the series began that both Republicans and Democrats are responsible for the craptacular state of our roads and transit in Minnesota. Barnes wrote:

This series is not an attempt to point fingers at any political party. The reporting shows that the decisions to delay repairs to many of our most dangerous roads and bridges have been handed down from one administration to the next, DFL and Republican alike.

Doesn't Barnes read her own paper? As Mark Gisleson wrote the other day,

I'm still waiting for even just a shred of evidence that the Democrats had anything to do with the starving of Minnesota's infrastructure.

Barnes, ala Doug Tice or Katherine Kersten, is trying to undo the harm done to Republicans by reality-based reporting. So when you read great reporting like that of McEnroe and Kennedy, know that it is done more or less in spite of poor leadership from the top.

Their first offering, published last Sunday, was headlined "This bridge can't wait," and offered a harrowing tale of a bridge in Hastings, Minnesota, that obviously should have been replaced years ago.

Part two featured a famous national highway that runs along southern Minnesota, headlined "Hwy. 14: Highway of horrors," where even Republican local lawmakers shook their heads in disbelief at the antics of our No New Taxes governor. The Highway 14 story also contains 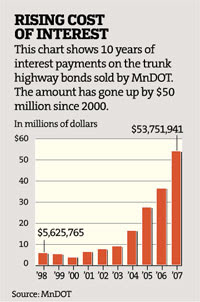 a chart showing state interest payments on highway bonds; in 1998 we paid $5 million; this year we paid $53 million. In interest. Does anyone remember when governor Pepsodent asked the contractors who bid on the Highway 62 redo to self-finance the project? When no company bid under those rules the project was set back at least a year, costing state taxpayers even more.

Part three, headlined "Flying into danger zone?" looked at how the governor's lawyer made a bundle off of getting MnDOT to change zoning laws around the airport, allowing dense development in areas that should be designated as buffer zones to prevent loss of life in the event of a takeoff or landing plane crash. No surprise that governor Pepsodent has now appointed said lawyer to the Minnesota State Supreme Court.

This great reporting should be complemented by great writing on the paper's opinion pages, calling out the Republicans who have fought investment in our infrastructure for decades. As Brian Lambert wrote, calling the I-35 bridge collapse the top local story of the year:

If ever a single event seemed destined to launch a spear through the heart of the cynical, recklessly simple-minded “Small Government” echo chamber, it should have been this one. Government on the cheap = Grossly deficient infrastructure … and a lot else. As the year ends it appears Gov. Pawlenty has again out-maneuvered progressives, mostly by throwing the hapless Carol Molnau under the bus. Maybe the session will draw blood.

So it's clear progressives and Democrats have been valiantly trying to get the state's Republicans to go along with investment in infrastructure, but the Repubs have shrewdly exploited the political system to thwart their efforts. There is not, as Nancy Barnes says, blame on both Republicans and DFLers. This is a Republican-made mess. One last point: Where was the Strib when the Republicans were eviscerating our state's transportation system? Why did it take a major bridge falling before they reported on it?
Posted by Rob Levine at 8:13 AM

This is as ignorant as the author is.