Today the failed experiment that is charter schools represent about three percent of all national primary and secondary schools. President Obama's plan for improving public education is to double the number of charter schools - to six percent of all schools. How in the world creating MORE failed charter schools - all the while maniacally focusing on teachers as the sole cause of the supposed failing of public education - will improve education is not discussed, as if the non-existent market for schools is some kind of magic bullet. And what will become of the 94 percent of schools that are not charters? 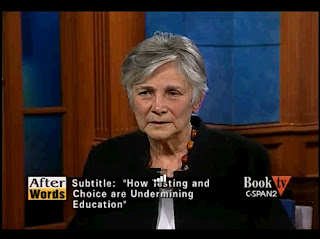 Now one of the prime ideologists of the destructive No Child Left Behind act, and a chief right wing proponent of school choice, charters and school vouchers has done a 180 degree turnaround, denouncing NCLB as a blueprint to destroy public education, and school choice as a failed theory originated by White southerners after the 1954 Supreme Court ruling Brown vs. Board of Education, which outlawed racial segregation in public schools. It is a stunning turnaround for Diane Ravitch, who besides being a (former, now) right wing operative is also a noted historian of public education. Click the image at right to watch an interview with Ravitch from C-Span's Booknotes.

Her new book, The Death and Life of the Great American School System: How Testing and Choice Are Undermining Education, is about as powerful and complete a repudiation of American education policy over the past 20 years as one could find. She is especially harsh on President Obama and his wretched Education Secretary Arne Duncan. Ravitch says she met with Duncan to share her concerns with Obama's education policy of blaming teachers for students' failures and his pressing for more failed charter schools.

Using her decades of research experience, Ravitch pointed out to Duncan the error of his and Obama's views on education, and how they would achieve the exact opposite of the purported goals. She described the obvious fallacies of the economists and statisticians whose views rule education policy.

Noticeably she placed poverty at the apex of reasons for failing students, and recommended a government policy of dismantling the NCLB testing regimen and charter schools, instead using the money for poverty reduction, which would have a much stronger effect on creating better students than punishing those who are trying to help. According to Ravitch, Duncan listened politely but paid her no mind.

Given Ravitch's importance to the right wing school "reform" movement, and her shocking and brave turnaround, you'd think her ideas and research might have an impact on our discourse, but you'd be wrong.

The Right is already going about rewriting its own history. John Stossel, for example, has already dispatched Ravitch by reporting on her turnaround, then fishing around the regular channels for comments suggesting "Diane Ravitch was never really a reformer." Really? You wouldn't know that from her writings, nor her professional affiliations, both political and within the conservative movement.

Recently in a disgusting display of ignorance and ill will on CNN Wolf Blitzer teamed up with Arne Duncan and "Bookie of Virtue" Bill Bennett to spend a half hour telling lies about public school teachers and charter schools. Duncan is touring the country with Newt Gingrich and Al Sharpton - those noted education experts - touting Obama's sadistic education policy.

Here in Minnesota we are regularly treated to anti-public school teacher and pro-charter school nonsense in the Star Tribune. Buffoons like Don Samuels advocate the exact policies which Ravitch so efficiently debunks, but thanks to the censorship of the newspaper readers will likely never know they have been duped. At any rate, here's three cheers to the courageous Diane Ravitch.
Posted by Rob Levine at 10:55 AM