Newt: West vs. Forces of Islam

So Newt is out for prez. Now Newt will have to rely on his non-profit "American Solutions" to distribute his erstwhile campaign theme that World War III is in progress, and it's a war between "The West" and "The Forces of Islam."
Posted by Rob Levine at 12:24 PM No comments: 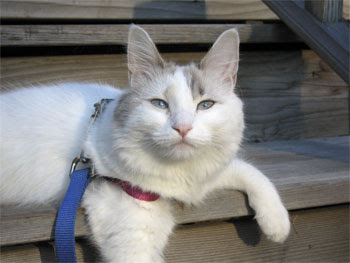 This is Abbey; like our other cats she came from the humane society. She's about 18 months old, and we think she is an American Ragdoll.
Posted by Rob Levine at 3:01 PM No comments:

Kochs get free pass in Minnesota

A few days ago the PiPress wrote a story about an expansion of the Flint Hills refinery in Minnesota. The story (here) failed to mention that the plant is owned by the Koch brothers of Kansas, who are the nation's worst environmental criminals. You'd think a "business" story would mention who owns the plant, and what their record is, but no. The Kochs always get a free pass in Minnesota. BTW - the Flint Hills plant is so dirty that the Kochs actually changed the name of the plant to evade their own reputation as environmental crooks.

One other point: The former head of the Minnesota Pollution Control Agency, Sheryl Corrigan, who came to the MPCA after being an 'environmental manager' for 3M, another of Minnesota's biggest polluters, now works for the Koch brothers in Wichita.
Posted by Rob Levine at 6:39 AM No comments: