A lot has been written (blogs, news, technorati) and said over the past few days about the passing of conservative icon William F. Buckley. I personally like this one from Jane Hamsher over at firedoglake where she argues that Buckley was far preferable to today's Straussian Republicans who will say anything to achieve their aims, whereby Buckley was very upfront, i.e. he argued honestly, about his sometimes repugnant (and factually wrong) views.

In New York state last night Democrats won a special election in a state senate district that had been held by Republicans for a century, and where Republicans hold a 2-1 advantage in voter registration. Don't be surprised if something like this happens in Minnesota in November, where Democrats have been on a roll, especially in swing areas like around Rochester and in the Twin Cities' western suburbs. If and when that happens expect the Strib to lead the post-election coverage with the amazing story of how one or two Republicans bucked the tide.
Posted by Rob Levine at 7:14 AM No comments:

As I've written since I started this blog, the Minneapolis Star Tribune has shamelessly promoted Republicans and smeared Democrats for at least the past five or six years. Today again their story describing the McCain scandal is fronted by a headline exonerating the Republican presidential candidate, even as reputable news organizations illustrate the lies he is caught in. This is the third story run by the Strib in this scandal that deliberately distorts the story by covering for McCain.

Today the headline on the McCain story is: "Ex-Paxson president says he never met with McCain about FCC delay, and doubts CEO did, either." Problem is, they DID meet with McCain to lobby him, BEFORE he sent letters to the FCC, which the FCC deemed extremely inappropriate. And McCain lied about meeting with them until it came out that he admitted just that in a deposition, and he did change his vote in committee to save the company.

Also today the Strib ran with a Nedra Pickler story that smears Barak Obama that is dependent on perspective from disgraced Republican political hit man Roger Stone, who started a website against Hillary Clinton with the acronym C.U.N.T. Of course the story provides no background on the disgusting history of Stone.

A little while ago I asked how low the Strib can go, and thought we might have reached the bottom. Pimping a story featuring a Hillary Clinton hater who basically calls her a cunt in public plumbs new depths, even for Doug Tice and the Star Tribune.

...adding: How pathetic is it that we have to go to conservative British newspapers to get the straight dope on this story? From the London Times:

And from the Guardian:

Posted by Rob Levine at 7:57 AM No comments:

So today the story from the Washington Post is that McCain is a guy whose campaign is made up primarily of lobbyists (59 federal lobbyists are raising money for his campaign), but who makes his political living railing against Washington lobbyists. The Post headlined the story "The Anti-Lobbyist, Advised by Lobbyists."

But in Strib, the headline reads "McCain defends lobbyist ties," while the subhed says:

Sen. John McCain said Friday that while lobbyists serve as close advisers to his presidential campaign, they are honorable and he is not influenced by corruption in the system.

See, John McCain isn't a hypocrite - he's just isolated the "honorable" lobbyists. And remember that when this story first came up two days ago the Strib introduced it with a story headlined "McCain says report suggesting inappropriate relationship with female lobbyist is 'not true."

In the end I think this Republican bias in places like the Strib may work against the Republican party because we can't really know how much power these new memes will have in the weeks and months ahead, but it could be significant. Right now the Republican talking heads on MSNBC and FOX news are claiming the episode is good for McCain because it gets his base behind him. Maybe. But the longer this goes on the more McCain's soft spots may be exposed to a skillful orator and politician, like, say, Barak Obama. Not to mention that, Karl Rove like, it cuts into McCain's strengths.

...adding: Maybe McCain was right when he called this an organized campaign against him. Now Michael Isikoff of Newsweek is writing that McCain lied in his response to the New York Times article on him when he said he had never been lobbied by Paxson Communications, the telecom company at the center of this scandal. Turns out McCain himself gave a deposition where he admitted to it.

Posted by Rob Levine at 5:58 PM No comments: 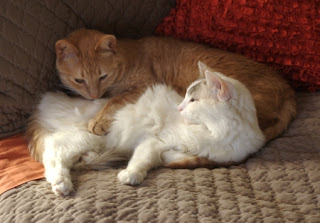 It hasn't exactly been warm up here in the northland lately. With the cold and snow the cats pretty much stay inside. Here are Simon and Abbey keeping each other warm the other day.
Posted by Rob Levine at 9:02 AM No comments:

McCain not out of woods

From the coverage of the McCain scandal on the TV machine you'd think the issue here was the credibility of the New York Times. While it's true that the paper's credibility is severely diminished by its behavior on the Iraq war and other issues, four of its top reporters put their names on this story. They understand that in today's media landscape their credibility really is their top asset - so they didn't push this story lightly - they believe in it.

Calmer heads are looking into the relationship of McCain to Iseman and seeing if not a romantic relationship, then certainly a relationship of lobbyist to senator, a senator, by the way, who basically saved the lobbyist's company by changing his vote on a telecom bill after being lobbied by her.

So McCain has thrown down the gauntlet. He better be telling the truth, and he better hope that none of the Times' anonymous sources out themselves or add to the story. He also better hope the traditional media doesn't look into his history of taking money and advice from Washington lobbyists. If either of those things happen, he's toast.
Posted by Rob Levine at 7:16 PM 3 comments:

More Republican bias at the Strib

This morning the Strib of course had to cover the breaking McCain story. As usual, there is a subtle Republican bias. On the front page of their website there is no link nor headline to the New York Times story on McCain's allegedly inappropriate behavior. There is, however, a prominent link and headline saying "McCain says report suggesting inappropriate relationship with female lobbyist is 'not true.'" Typical that they've already decided the real story is unfair persecution of a Republican.

...adding: Contrary to the Strib's take, there is a good probability the story is true: According to Matt Yglesias, McCain "...repeatedly cheated on his first wife Carol, of a number of years, with a variety of women, before eventually dumping her for a much-younger heiress whose family fortune was able to help finance his political career."
Posted by Rob Levine at 8:43 AM No comments:

The conservative philanthropy the John Templeton Foundation is giving $4 million to Oxford University in England to study "...whether belief in a divine being is a basic part of mankind's makeup."

I hate to get all existential here, but I thought we had already answered this question. Writers such as Otto Rank and Ernest Becker, and thousands of other scholars already know that even if there was no God, humans would inevitably invent one. Why? Man is the only creature who is unfortunate enough to understand the inevitability of his own demise.

The specter of death is the motivation for all human history, culture and achievement, not to mention the worst things men have done to other men (Thousand year Reich, anyone?). "Necessary Lies," as Rank called them, such as the promise of immortality by religion are a fundamental part of any human culture. Modern man has difficulty believing contemporary religion's 2,000 year old fairy tales, which is why we cling to life using extreme modern medicine, and build piles of money as symbolic power against death. To make a bad analogue, any port will do in a crisis of immortality storm. The harder it is to believe in religion the more people and elites try to convince themselves of its importance.

So - the geniuses who run the Templeton Foundation either don't know this, don't want to know this, have another agenda, or perhaps some combination of the above. Either way the fact they have snookered Oxford University into sanctioning their know-nothing approach to knowledge is indicative of what conservative philanthropy has done, and is attempting to do by funding so-called research at elite institutions. For years conservative philanthropy has pushed religion on the United States and the world, promoting a retrograde mentality and morality that is used by Republican (and some Democratic) politicians to preserve the prerogatives of the rich and the corporate. Just google something like "Religion in the public square," or "Faith-based" and you'll see what I mean.

Think about it: What is Faith, anyways? It's belief in the absence of evidence and reason - actually the exact opposite of our modern way of knowing things. So why would you have have an arm of the government run on "faith"? It's literally crazy, but there it is - our federal government now gives out like $20 billion a year to so-called faith-based organizations, most of it without any accountability measures.

The craze for religion is so great, as a recent poll showed, no Democratic nor Republican politician would succeed at running for president as an atheist. This deep prejudice among the electorate against the faithless is precisely the goal of conservative philanthropies like the Templeton Foundation, and its many allies in the tax-exempt community. At some point I begin to wonder how far this head-in-the-sand mentality can, or will, go; but when you see, for example, the number of people who don't believe in evolution in this country you know it's already gone too far.
Posted by Rob Levine at 12:06 PM No comments: 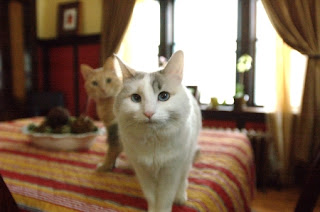 Here's a picture of Abbey from the other day; they do go outside a little in the snow and cold, but mostly they hang out inside.
Posted by Rob Levine at 11:34 AM No comments: 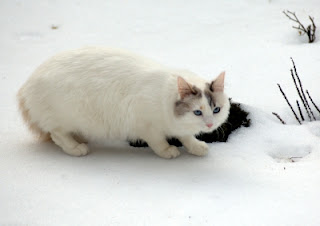 We're back out of the arctic temperatures - its 30 in the backyard today. Here's Abbey prowling around the greenery.
Posted by Rob Levine at 4:03 PM No comments: