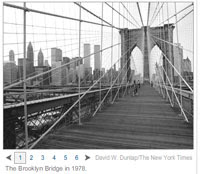 ty in 1986. At the time I was a photographer for the Minneapolis Star Tribune. At the last minute editors decided to send a photographer out for the festivities in New York, ostensibly to take pictures for a series of reports to be written by the great Larry Batson. Being the new kid in the newsroom I got the assignment. My friend Rick Elden and his then-girlfriend (now wife) Renata decided to fly to New York at the same time to deliver a backdrop for a New York photo shoot.
Thus was set four of the funnest days of my life. Since the paper waited until the last moment to send me the only hotel available was an expensive French one near Broadway and 54th. Not that I spent much time there - for four nights I arrived back at the hotel no earlier than 2 am. Anyways - I shot two or three assignments for Larry Batson stories, but for the most part hung out with Rick or just ambled around the city. I should tell you Rick is a performance artist who stands on his head and gets pictures taken at various places and in various ways. I personally have a pretty good library of this kind of picture. One day we were walking across the Brooklyn bridge and I took this picture: 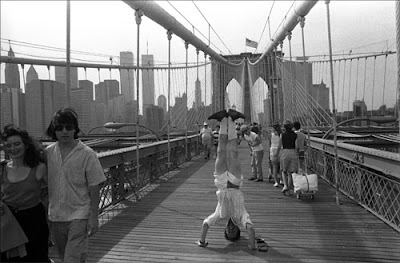 New York provided many interesting backdrops for photos of Rick on his head. His weekend ended with him proposing to Renata while standing on his head at the top of the Statue of Liberty (the day after I went home - sorry, no photo of that). Here he is on the beach in Brooklyn. For some reason I didn't have a motor drive for the shot and Rick kept imploring "Shoot, shoot," but I had to wait for the right moment. In the end I got off two frames; here's one of them: 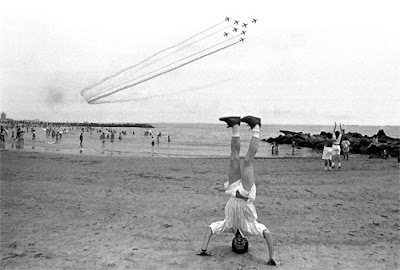 Here he is in front of Nathan's: 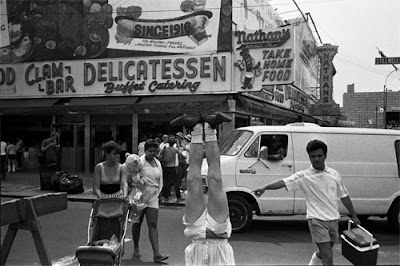 And on the subway, entertaining the troops: 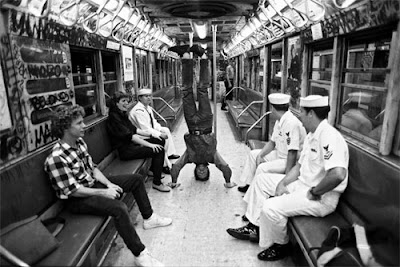 That's Renae in black on the left, and Rick's friend Brian in the chex. My favorite picture of the week happened late one night while we were walking on a street. We passed a group of people and one of Rick's friends noticed that the group we passed was actually Andy Warhol and his entourage. Rick immediatly backtracked and announced to Warhol who he was and that he stands on his head as performance art, whereupon he proceeded to stand on his head on the darkened street corner. Immediately a number of the entourage produced snapshot cameras and began taking pictures. I only had one camera with me, and no flash, so I stood behind the scene and put the camera on bulb and opened up the shutter. The picture was illuminated by the flash of one of Warhol's friends, producing the following picture, which I transmitted to the Strib the next day, and which ran in the paper. 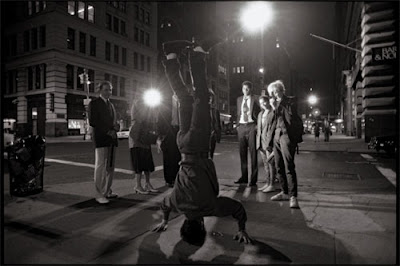 Posted by Rob Levine at 8:37 AM No comments:

Grasshopper in the backyard this morning - the cold must really put the freeze on them: 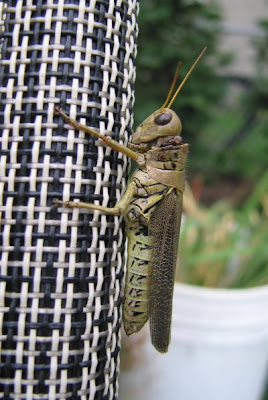 Posted by Rob Levine at 2:22 PM No comments: