Hello again imaginary audience. For me personally there is nothing more effective at Spring fever alleviation than a trip through parts of Arizona. A few weeks ago I spent three days with a friend in Phoenix, then embarked on a four day drive through some of my favorite parts of the state. I should add that I had no fixed plan - I just winged it, starting from Tucson.

First I drove from Phoenix to Tucson first on highway 60 west to the town of Superior, then via state highway 77, which runs through the San Pedro valley southwest of Phoenix. It's a beautiful drive and keeps you off the Interstate.

Once in Tucson I checked in at the Westwardlook resort, which is my favorite place to stay. 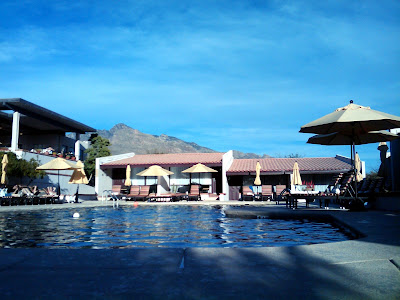 View from the hot tub at the Westwardlook
Though they have a four star restaurant at the Westwardlook, I don't like it that formal, so I usually eat at the outdoor cafe. In honor of my wife who couldn't make the trip I ordered a Prickly Pear Margarita, which is a little sweeter than a regular Margarita, so it goes down pretty easily. 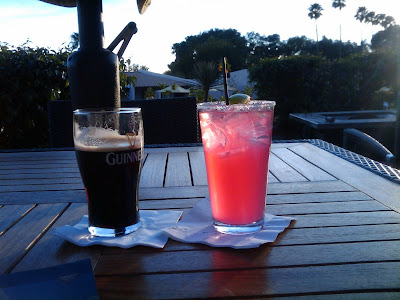 The next day it was off to Kitt Peak Observatory - about 60 miles southwest of Tucson. I knew from other trips, mainly to Nogales, that anytime you travel near the Arizona/Mexico border you're bound to encounter swarms of border patrol, including roadblocks where every car traveling north is stopped. I had planned to visit the observatory then continue on west to Organ Pipe National Park and the town of Ajo. However, after considering the pain of dealing with roadblocks and the border patrol I decided to make the trip to Kitt Peak just a day trip. I did pass one roadblock on the way south, and was stopped by the same unit, which had moved south, on my return. When you combine the militarization of southern Arizona and the militarization of our airports you begin to understand what it must have been like to live behind the Iron Curtain during the Cold War.

The road to Kitt is pretty much flat as you drive southwest from Tucson. After about 40 miles there's a turnoff to the left that is a 12 mile road full of switchbacks that leads to the top of the peak. 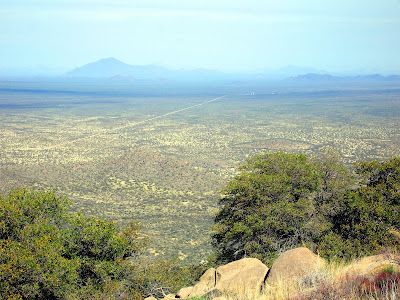 This is a view from about halfway up, looking northwest. 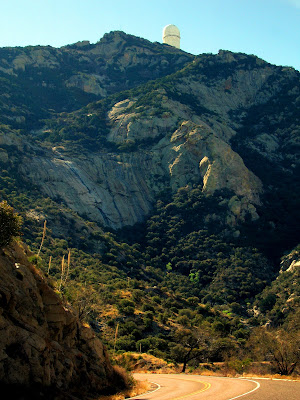 A view up the mountain as you near the observatories. 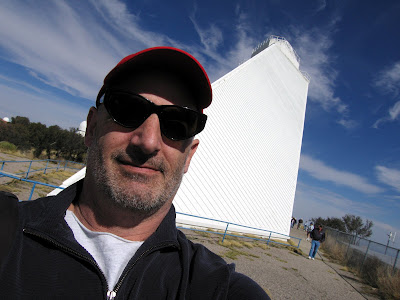 Here's some tourist at Kitt Peak; behind him is the solar observation telescope, which analyzes infrared waves from the sun. 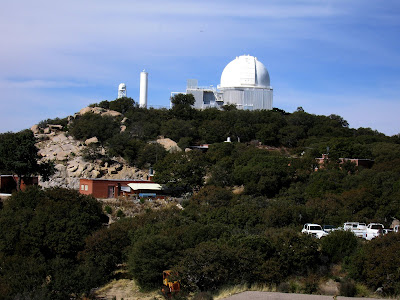 A view of one of Kitt's traditional telescopes. It's clear from taking a tour of the mountain that the place could use a bit of an upgrade. No doubt the people there are making heroic efforts to coax the most out of old equipment, but I hope they're getting a little of that Obama stimulus money to buy some new computers and such.

The next day I drove from Tucson to Flagstaff via the backroads. The road from Globe to Show Low is a particularly beautiful drive. About halfway you cross the Salt River (see photo below) in a spot where it looks remarkably like the Grand Canyon, and where there is a trailhead to rafting and hiking in the Salt and Black River Recreation Area. 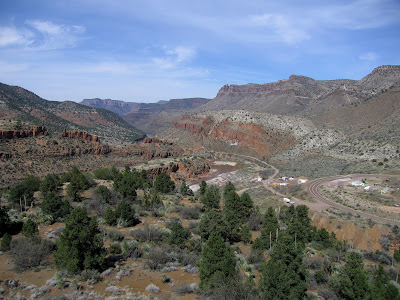 In the right-center of the picture (click to enlarge) you see the access point to the upper canyon of the Salt River off of US 60 (Arizona 77).

The reason I drove to Flagstaff was for a trip to Wupatki National Monument the next day. Wupatki is an ancient puebloan settlement (map) that was occupied up until about 800 years ago, when climate and other factors forced its dissolution.

This is a view of the main Wupatki settlement, looking down on the complex from the east. To the left you see the main apartment dwellings; in the near center is the community room, a place for ritual ceremonies; at the bottom center in the ballfield where the Puebloans played a form of basketball.
I find it interesting when there to imagine the Puebloans as they lived. The landscape was different 800 years ago - there was much more water, and the plain was covered in native grasses. But you get the idea that it was a somewhat difficult life at Wupatki, having to look for water and fuel far afield. But maybe the payoff was the amazing beauty of the desert landscape and the suitability of the geography for community living. 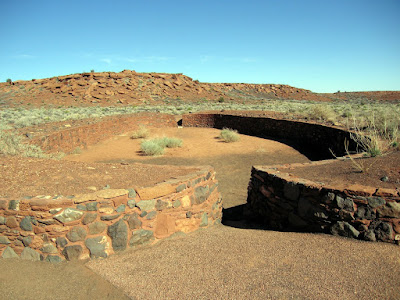 This picture and the one below are of the ballfield. 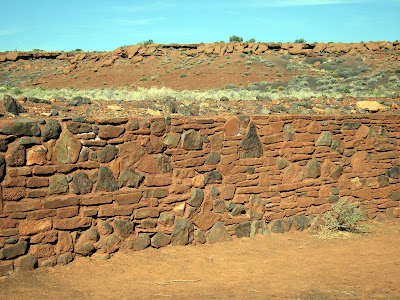 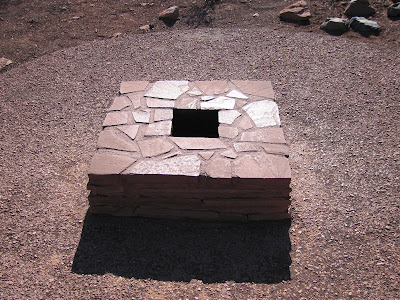 At Wupatki there is a great view to the southeast of San Francisco Peak, which is a 12,000 foot mountain just north of Flagstaff: 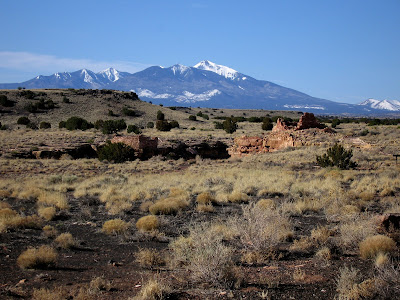 If you click on the above picture and look closely in the center you'll see there's an opening in the desert that was probably an ancient wash that the Puebloans used as a community gathering place. They built their homes on the edges of these things, probably because the living spaces provided good protection from the wind.

To get back to Phoenix from Wupatki I took the scenic route to Sedona, then over to Jerome and on to Prescott. Below is a picture of Jerome when approaching from the northeast: 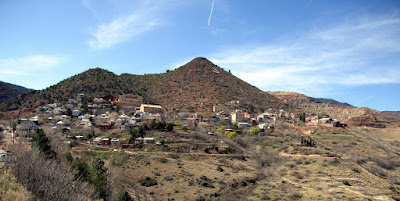 Jerome is an old mining town that almost turned into a ghost town when the mine closed, but is now sort of an artists colony. It sits on a steep hill where the streets are almost terraced parallel to the hill.

From Jerome I took the overland route to Prescott, a road that wound around the mountains for about 15 miles before emerging back into the valley. After that it was a short trip to Phoenix and the flight home. All in all I'd have to say a very successful trip.
Posted by Rob Levine at 11:11 AM